Song To The Moon

The man I Love

Tell Me On A Sunday

What a Wonderful World

MUSIC WHICH CARESSES THE SOUL

Welcome all lovers of love, musicals, classical songs and opera arias as well as crossover styles. I am a classical, popular and crossover singer and the love of my life is singing. I believe that my songs will provide you with a lot of enjoyment and delight. Currently I am giving concerts in different genres of musicals, film, Celtic, Latin American and Italian songs. I also give concerts of classical music by singing operas, operettas, and classical songs. 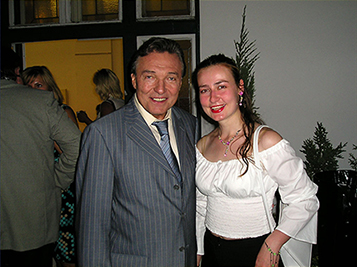 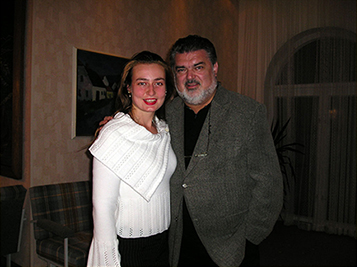 I was born in Ostrava in the Czech Republic. I have two hobbies since my childhood: singing and tennis. After finishing my studies of Pedagogy in Prague I decided to become a professional singer. I started to study at the Conservatory of Prague and after six years of studies I graduated in classical singing. A year later I have recorded my first CD "The Star Is Rising" together with an Orchestra. I have recorded two new CDs: : White Pigeon and Golden Gate Bridge Dreams. These albums contain songs from the world of the classics to musicals, film and crossover songs.

Later on I had some performances in a music show on the National Czech Television as well as on a regional television and radio. Currently I am recording the songs and videos for a new CD together with the Philharmonic Orchestra. I am collaborating with the Swiss composer Vladisav Jaros who has written numerous new songs in a Crossover style between Classical and Pop exclusively for my performances.

I sing in Cultural Centres, Theatres and Spa Concert Halls. I am available to sing at different events and special occasions with piano, keyboard, classical guitar and with orchestra accompaniment. I sing mainly in English, German, Italian, French, Russian, Spanish and Czech languages. My program can be accomodated to include other singers and soloists of the theatres and various concerts with two to five musicians are also possible using half-playback if required. 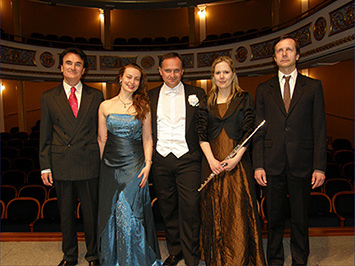 Vladislav Jaroš, Julie Meixner, Roman Krebs, Michaela Petrová, Martin Marek
Julie Meixner & Oldřich Zahuta Orchestra
I also perform with my band "Julie´s Dream" together with the Swiss composer and writer Vladislav Jaros (acc. guitar and piano) and the skilled blues singer and musician Karel Bastar (baritone, keyboards and piano). The "Julie´s Dream" band gives performances with a program of their own songs (solos and duets) in a Crossover style somewhere between classical and soft Pop. Music is the passion of my life. I put all my heart and soul into these songs and I hope they will enter your heart as well.